The vendanges in Beaujolais are in full swing. Two years ago I worked the fields during this grape harvest, one of the best times I ever had. It’s such a kind gesture of time that you forget all the pain. I still feel a warm glow spreading through me when I think back. Sort of like a good wine buzz. 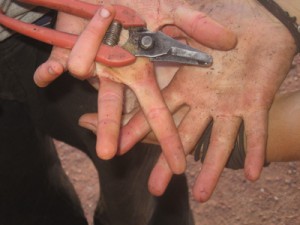 Before my rite of initiation into Frenchness, I could have never imagined I would ever need, truly need, a drink at 9.30 in the morning. But only a cup of cool red wine picked me up and kept me going until lunch. Dirt-caked clothes, hands full of cuts and blisters, I had given up to rub off the black soot. My back was whining like a recalcitrant adolescent, making it pretty clear to me that it wouldn’t obey me much longer.

I must have some twisted idea of fun. Where’s the fun in standing hunched over for eight hours a day, balancing like a mountain goat on slippery slopes, doing your very best to get all the bunches off the vines under the ever-watchful eye of le patron?

Our team consisted of about thirty young people from all over the world, and we were hosted at a family-owned winehouse in Fleurie, a cute town in the middle of a hilly patchwork blanket of vineyards. The vine grower and his wife shared the work with his brother-in-law, the winemaker, and his wife. The equation was simple: one couple made sure there were enough good grapes and the other made sure the grapes turned into good wine. The 22-year old son was a starting wine farmer himself.

Every day was pretty much the same. At six thirty, you rubbed the sleep out of your eyes, quickly downed some coffee and baguettes, until we heard the dreaded ‘au boulot!’ (to work!). We went on our way, buckets and cutting shears in hand. The patron assigned you to a row and off you went. Every time you finally finished a row with a sigh of relief, there would always be another row. And another one. Minor injuries occurred frequently, those shears make mean cuts. Sweet mother of Jesus! (pardon my French…) I kept busy observing the different shapes and sizes of the vines and grapes while hammering away. The knobbly vines, some of them more than fifty years old, reminded me of gnarled old men. 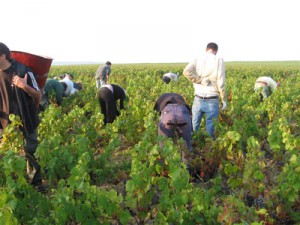 While you’re alone with your thoughts, grape picking is actually teamwork. People help you finish your row, and you need to pay attention when the porteur, a strong fellow carrying a gigantic bucket on his back, comes by to let you empty your bucket into his. They made you hang in there when you were about to give up, just by yelling something utterly ridiculous.

After two hours: a break. A straw basket with hunks of baguette appeared miraculously, along with a bag of salami slices and another with chocolate. Fat, carbs and sugar: the casse croute, a second breakfast on the land had all you need to keep you going until lunch. And a little wine of course, ‘un peu de courage’ as we called it.

When lunchtime finally arrived, we ecstatically attacked the food laid out on the table. A typical lunch would consist of crisp lettuce with lardoons soaked in a tangy Dijon-mustard dressing or home-made pâtés, followed by rich meat stews you could lavishly sop up with baguette, followed by bouncy cheeses and chocolate éclairs, all washed down with plenty of vin rouge. We just ate and ate and ate the hearty homemade food until reality hit us that we had to get back to work and we were too full. Thankfully we could look forward to the exact same repetition of this eat-drink-be merry-ritual in the evening. And at night it got even better.

For at night, after dinner, we were invited to visit ‘la cave’ by our boss, who got little sparks in his eyes just by saying the word. It turned out to be some sort of sanctity where we got to taste the real deal, not the watered-down plonk we knocked back all day. Here we drank the friendly, flowery, sensual wine of Fleurie, the one that turned everyone in our group into an even more beautiful person. Our boss transformed into a kind, funny and thoroughly satisfied-looking man, having put his harvest worries on hold for the night. We talked and laughed and bullshitted until our eyelids simply dropped, and we dragged ourselves to bed, knowing there would be another demanding day ahead of us.

I loved the moment when we walked to the vineyards in the early morning and looked out over the hills, where wafts of fog hung in the air like long strands of granny’s hair and the sun spread a pinkish glow over the village further down. The grapes were covered with perfect dew tears. The landscape looked so serene and unreal that I wouldn’t have raised an eyebrow if a little dwarf had sprung out from the vines. I would have joined his little happy dance. 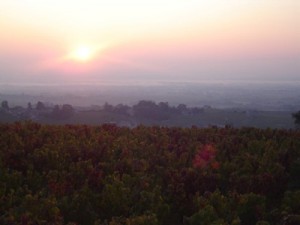 Unsurprisingly, the other moment of ultimate bliss in the day arrived at the very end. The last hour lasted a lifetime, but when you looked around and saw the fatigued faces illuminated by the setting sun you simply pulled through. You saw true happiness breaking through the weary expressions when the boss said: c’est bon, c’est fini. I often walked back to our chateau giddy with exhaustion, feeling every fiber in my body. Eight hours of grape picking! And I am still alive! Several times I reached a grape-picker’s high: feeling so tired and happy I could only goofily smile.

It’s amazing how quickly a group of strangers turns into family when you’re spending all your time together. We shared everything: laughs, food, wine, pain killers, three toilets, the deafening snoring during the night. After we were done picking, our celebration bacchanal lasted for almost two days. We joined in a water fight, sung French drinking songs, played pétanque (French bocce balls) and just hung out some more. “I hope I wasn’t too hard on you”, our boss said to me and some German girls during our goodbyes. “You did very well. Really, if you have finished the vendanges, you can take every hurdle in life.” The compliment gave our tired selves a huge boost.
Back home, I wasn’t just going through a slight alcohol withdrawal. I suffered from an overall hangover I recognized as post-summer camp nostalgia. I hadspent a lot of time with my new friends Exuberance, Self-indulgence, and Invincible, after I had told my longtime wiseass friend Self-restraint to take a hike. I had felt so free and alive, and I wanted to hang on to this feeling.

When I pour myself a glass of Fleurie in remembrance, I smell the wine long and hard. I sense tones of hard work, togetherness and friendship. Its bouquet is balanced, with equal notes of pain and pleasure.
This is the recipe for a traditional, rich coq au vin, that we had on our last night. I used a light Italian wine, because it’s really really hard to find French wine here! I recommend you use a decent wine, because if you use some plonk you’ll taste it.

There are many, many recipes for coq au vin. I combined those of British kitchen goddesses Elizabeth David and Delia Smith, and added some twists of my own. Flavors get more time to brighten when you prepare this dish one day in advance.

Bring wine with broth and bay leaves to a boil, turn down the heat and reduce until you have about half the amount left. Add the mushrooms during the last five minutes and strain the sauce, set the mushrooms aside.

Cut the chicken in smaller pieces if you want. I used two big thigs/legs. Melt the butter with the oil in a frying pan, and fry the chicken pieces on both sides until they’re golden. Move the chicken to a casserole that is large enough for the meat to be covered with liquid later.

Fry the pancetta in the same frying pan, transfer them to the casserole, then gently fry the onion, crushed garlic cloves and carrots for 5-10 minutes (you won’t need to add extra oil). Add everything to the casserole.

Now pour the wine mix over the chicken, add freshly ground black pepper, a little salt and a sprig of thyme. Put a lid on the casserole and let the chicken simmer for about 40 minutes. Add the mushrooms during the last 10 minutes.

Transfer the chicken, bacon, onions, carrots and mushrooms to a serving dish and keep warm. Get rid of the bay leaves and thyme. Bring the liquid to a boil and reduce it further, until you have about 2/3 thirds left. Add the butter-flour paste and whisk it in until the sauce has thickened. Pour the sauce over the chicken and, if you want, heat it up in a hot oven for another 10-15 minutes to let the flavors marry.

Before you serve the dish, sprinkle some chopped parsley over it. Serve with fresh baguettes and a salad.